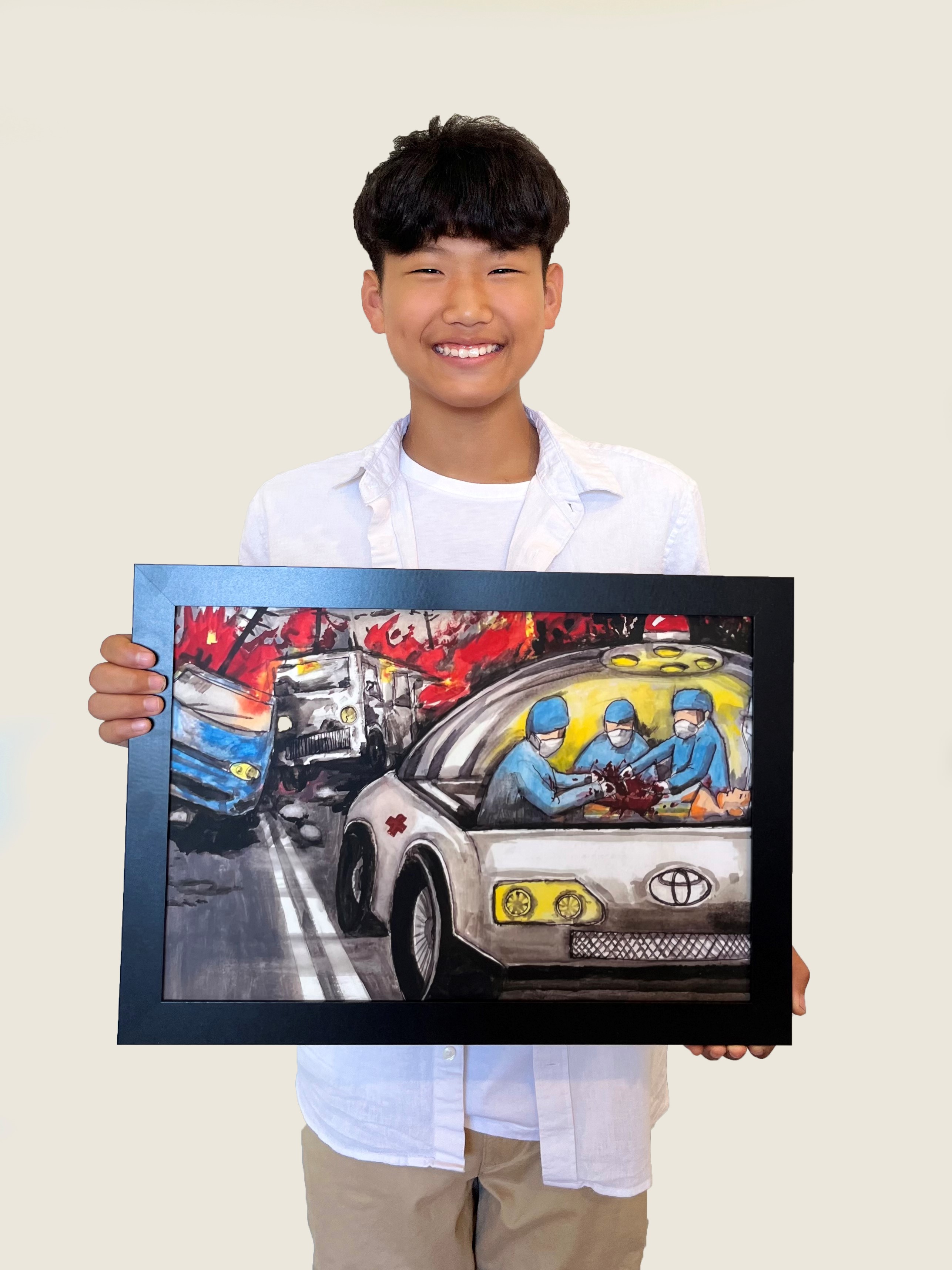 TORONTO, ON – AUGUST 5, 2022 – A 14-year-old from Alberta has been named as a finalist in a global design competition. Joseph Lee from Airdrie, Alberta is the only Canadian finalist in Toyota’s annual ‘Dream Car Art Contest’ which invites youth from around the globe to design a vehicle that helps make the world a better place.

This year’s contest drew in 531,692 entries from 78 countries and Joseph’s “Surgery on the Road” design was selected as a finalist in the age 12 to 15 category. Joseph’s vehicle is designed to help doctors provide surgery while a patient is in transit to increase their chance of survival.

As a finalist in the world competition, Joseph has won a cash prize of USD $3,000, which is intended to be used for educational purposes in order to continue fostering his innovation and support his passion to make the world a better place. 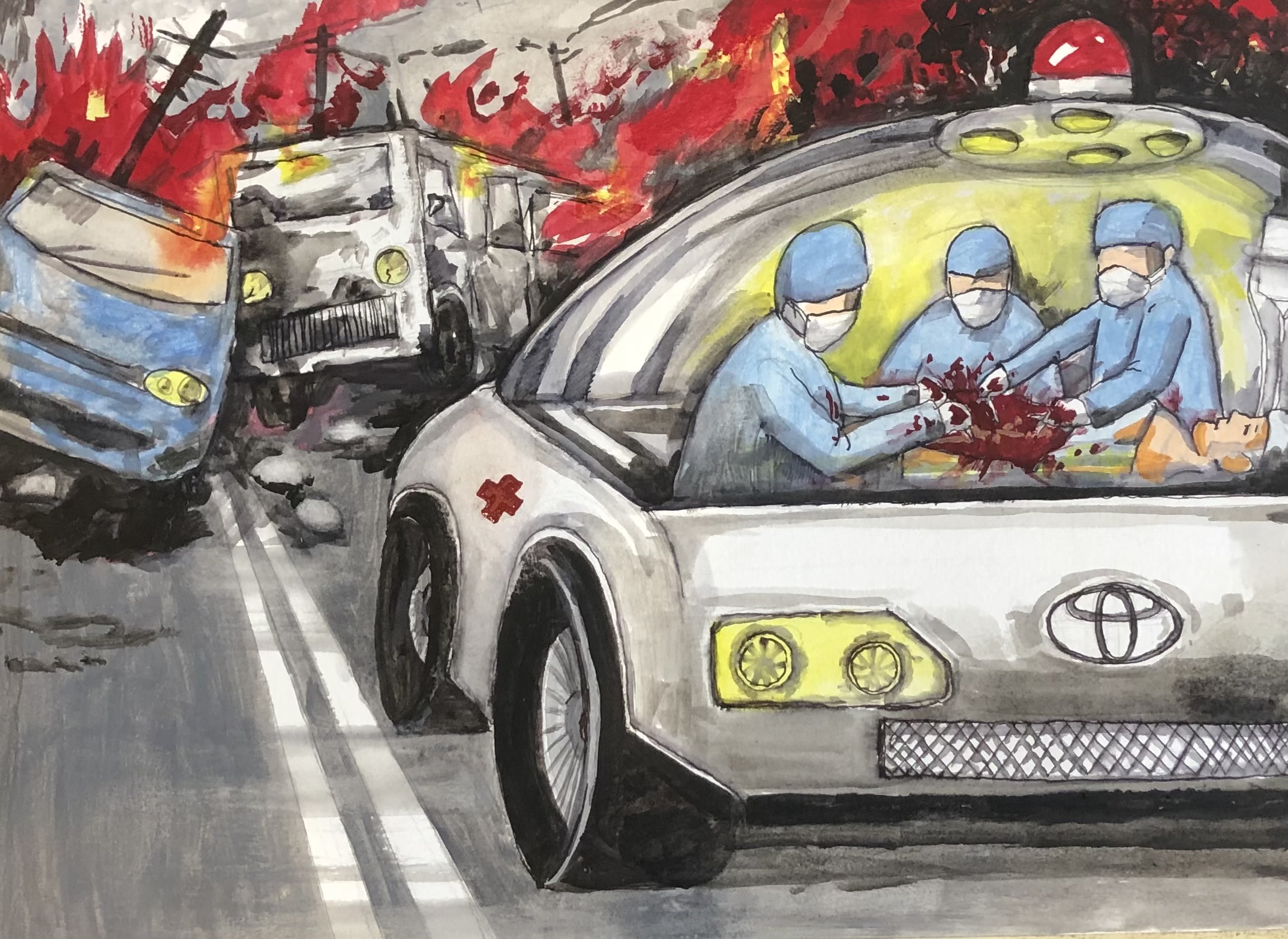 Before his design was named a world finalist, Joseph was among eight other Canadian kids who were selected as Canadian winners by a panel of distinguished Canadian judges:

Here’s what the judges had to say about the submissions to this year’s contest:

“I’m truly impressed by the creative, innovative and world-changing ideas presented by Canadian youth. With their vision to design a future that is more sustainable for our people, animals and ecosystem, it’s clear to see that these are the leaders of tomorrow bringing forward their world-changing ideas.” – Larry Hutchinson, President and CEO, Toyota Canada Inc.

“Transformative innovations start with an idea. Congratulations to all youth who participated in this competition. Imagination, ingenuity, hope and creativity shines through in the submissions, making judging especially difficult. Participants designed wonderful vehicles that help people, animals and the environment, showing what good hands our future is in.” – Bonnie Schmidt, President, Let’s Talk Science

“This year’s entrants are proof our kids are very much engaged with and concerned for the future of the planet. They see cars as vehicles that can lead to better, safer times. The level of thought and consideration in all age groups is really remarkable.”– Lorraine Sommerfeld, Canadian Automotive Journalist, Driving.ca

“Overall, there were some super smart concepts and some amazing pieces of artwork. What this contest demonstrates is that young Canadians are both thoughtful about the world and the role technology and vehicles play in it… and are also very creative.” – Brian Sheppard, Executive Creative Director, Saatchi & Saatchi

“The submissions were all incredible. These kids have a keen eye on the problems of today and have demonstrated imaginative ideas for the future. Every one of them should be applauded for their efforts. The future is in incredibly talented hands.” – Heather Greenwood Davis, Creative Influencer, Journalist and Media Host

First held in 2004 and now one of the world’s largest global design contests for children and youth, the Toyota Dream Car Art Contest invites future artists, designers and engineers to share their ideas about the future of mobility.

Toyota Canada Inc. (TCI) is the exclusive Canadian distributor of Toyota and Lexus vehicles. Toyota has sold over six million vehicles in Canada through a national network of 288 Toyota and Lexus dealerships. Toyota is dedicated to bringing safety, quality, dependability and reliability to the vehicles Canadians drive and the service they receive. TCI’s head office is in Toronto, with regional offices in Vancouver, Calgary, Montreal and Halifax, and parts distribution centres in Clarington and Vancouver. Toyota also operates two manufacturing facilities in Canada. Having produced more than nine million vehicles, popular Canadian models built at these facilities include the Toyota RAV4, Toyota RAV4 Hybrid, the Lexus RX and RX hybrid, and the Lexus NX and NH hybrid. Recent investments at its facilities in Ontario will allow for increased production of these top-selling models for the North American market.